Are These Elopement Misconceptions Stopping You Booking More Clients? 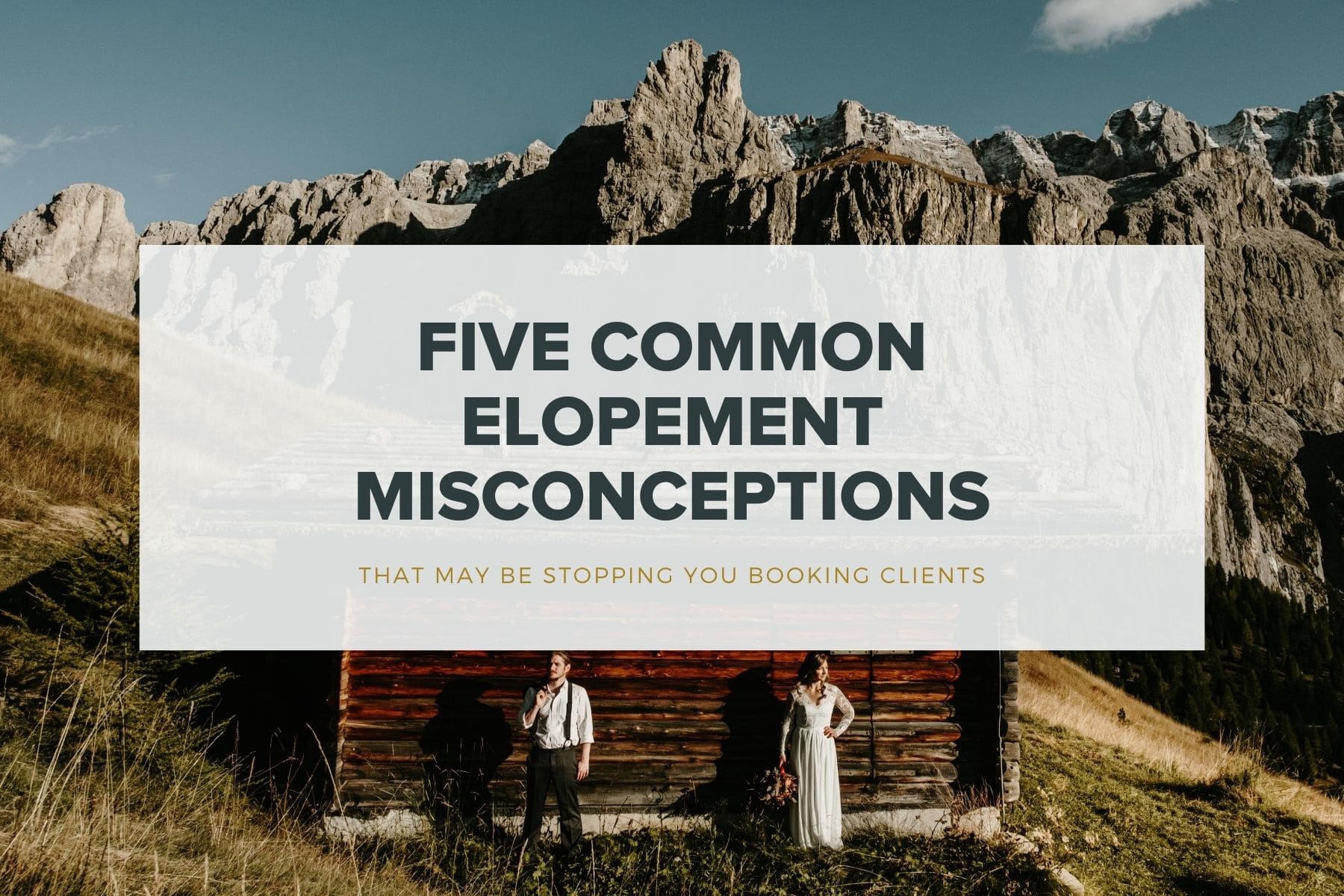 Disclaimer - This website contains affiliate links. I earn a very small commission if you make a purchase using my links, which I'll probably spend on outdoor gear and more houseplants.

The wedding industry is having to change a lot in response to the coronavirus pandemic. With social distancing looking to become a “new normal” for the foreseeable future, couples are turning to the idea of eloping so that they can still get married. And while I’m super happy that elopements are finally getting the spotlight they deserve, I’ve noticed that a lot of people are still stuck with out-dated views on what it means to elope in 2020. As someone who has built a business around shooting elopements and adventurous weddings, I thought it was time to shine the light on some wedding industry misconceptions about elopements.

If you’re confused about what an elopement is, you’re not alone. What it means to elope has evolved so much from the days of running away in secret to Las Vegas or Gretna Green. Elopements have become something wonderful and empowering for couples, so if your goal is to start targeting this new style of wedding, you need to make sure your marketing isn’t giving off mixed signals.

If you’ve had limited experience with eloping couples, you may have a lot of inaccurate views of what eloping is. As the elopement industry is growing, now is a really important time to catch up with the world of elopements so that you aren’t accidentally putting out the wrong messages to your audience who may now be considering an elopement instead of a big wedding.

Elopement Myth No. 1 – Eloping Couples Have No Budget

When a lot of suppliers think of elopements, they tend to assume that a couple is choosing to elope because they can’t afford a wedding, as this is possibly something they have experienced in the past. I’m not going to deny that there aren’t couples out there who choose to elope because they have no money for a wedding. Of course that still happens. BUT not every couple who chooses to elope is on a budget.

According to The Knot, the average wedding cost in the USA in 2019 was $33,900. For 1/3 of the price, a couple can have an elopement that is truly unforgettable, without having to even think about how much it is all costing. In my own photography business in 2019, my highest value bookings were from elopements where the couples chose to forego the big celebration in favour of having a great adventure together with an experience just for them.

Elopement Myth No. 2 – Elopements Only A Couple Of Hours

The only experience many people have of elopements are the requests for short coverage of a ceremony and a couple of portraits afterwards, so this is what most photographers offer as their “elopement package”. Whilst this can still be the case, there are also an increasing number of couples who realise that their elopement day is more than just a quick ceremony and a few pictures. They want their whole day to be something memorable, and they want to have it all captured. It’s really important to consider this when you’re working out your different elopement packages.

The shortest I’ve ever gone from booking an elopement to shooting it is 3 weeks. But I’ve had a few couples take 18-months to two years to plan their wedding day. However, the majority of the couples I work with fall into the 3-9 months in advance category. What I’m trying to show you is that it really varies. So when you’re looking at targeting eloping couples, don’t expect them all to be last-minute bookings. They may be planning further ahead than you think!

Elopement Myth No. 4 – Elopements Don’t Have Any Guests

Did you know that close to half of the elopements I photograph have a small number of close friends and family there with them. A lot of couples want that feeling of eloping, but they still want to celebrate with the people they love the most, so they find ways to include them in their day. So just because a couple is eloping, it doesn’t mean they won’t have anyone there with them.

Just as all wedding vendors hate it when people say that “everything costs more when you tell them it’s a wedding”, I get so annoyed when people assume photographing elopements is less work. I can understand why they might think that. There are fewer guests (sometimes none at all), and often the days aren’t as long. But where I might spend less time with a couple taking pictures on their wedding day, I’ve will have spent a lot more time with them during the planning and preparation stages, so in the end, I’ve probably put more hours into each elopement couple than I ever did for a more traditional wedding day. Why am I telling you this? Because I don’t want you to go in with super low prices for elopements thinking you’re getting an easy job. Elopements are a lot of work but so much fun!

I hope that’s helped you to see that some of the views you’ve held of elopements might not actually be true for many couples who are choosing to elope in 2020 and beyond. Elopements have changed a lot in the last 5 years, and if your goal is to start booking higher-value elopement clients, you need to change how you talk about eloping.

Are you ready to pivot your business and start attracting this new wave of couples who are eloping, but aren’t sure where to start?

Book a 1:1 consulting session with me, where I’ll help you to create a custom roadmap for taking your existing photography business and launching into the exploding & lucrative elopement market.

This site uses Akismet to reduce spam. Learn how your comment data is processed.